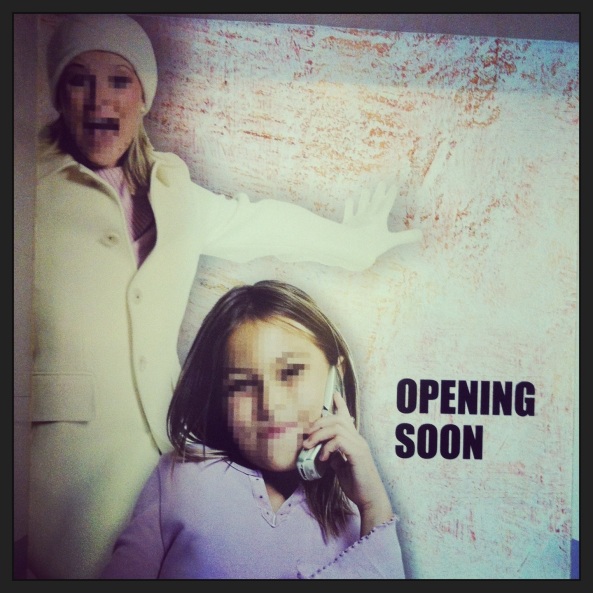 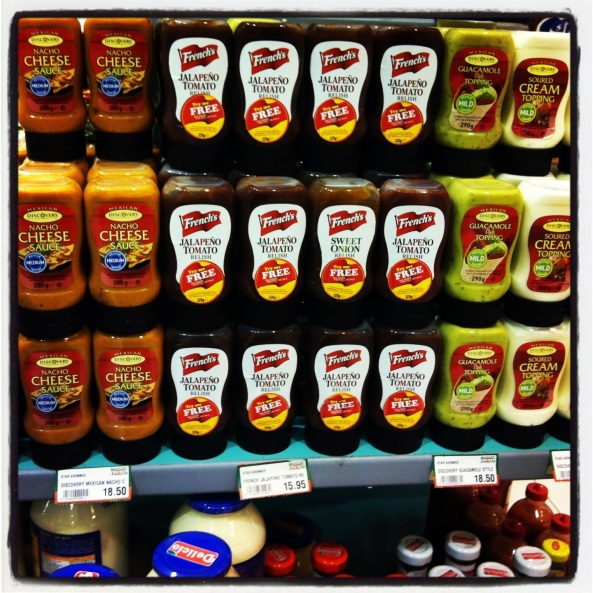 Now it is time for the ubiquitous Westerner’s observation of Saudi traffic.  This is a must for any Saudi blog worth it’s salt.

The oddest thing about traffic here is how similar the quality of the roads and vehicles are to the US.  The vehicle comparisons are more like the SUV dominated lanes of North Dallas instead of Prius happy Northern Virginia.  I’m pretty sure religious police here have some sort of ban on Priuses due to their suspicious lack of petrol consumption.

The wide roads with striped lanes, traffic lights, and curbs are similar to any US road in good condition.  The lack of a freeze thaw cycle and rain makes potholes pretty much non-existent.  Additionally, without a storm drainage system all the roads are nice and flat.  Of course this makes them lovely lakes if it ever rains, but that is minor detail.

The departure quickly comes in the design of the traffic islands, lack of signage, and odd rules of the road (described here with latent sarcasm).

The traffic medians are full of beautiful trees and nicely landscaped vegetation.  This is quite pleasing to the eye but eliminates an essential element to basic traffic flow.  The ability for one to turn or get out of the way of oncoming traffic whilst stopped waiting to turn.  Of course, this makes getting anywhere unbelievably frustrating.  Often we have to travel miles before being able to make a U-turn to get to the other side of the street.  This creates random bottlenecks in odd places throughout the city rather than distributing the traffic evenly over several route options.  This also makes Google Maps useless as it totally ignores road islands and assumes turning left or right is a valid option at any intersection.  I have to look at the satellite view and try and figure out the few locations available for multiple turn options when planning my route.  Here is an example:

Throw common sense out the window when navigating Jeddah roads!

Another frustrating feature is the lack of street signs and house numbers.  The street signs that do exist are mostly multi-part names.  Sometimes the names change.  For example Palestine Street is also referred to as Falstin Street.  Even if a street is fortunate enough to be named, most drivers don’t refer to the name unless it is a major thoroughfare.

The lack of house numbers makes the street nomenclature even more frustrating as there is no way to know where you are.  The result is directions by landmarks such after the Globe Roundabout, or two streets past the Danube Supermarket.

And finally, the best part about driving here are the rules of the road.  The following is a very serious how-to guide for following a few key rules that make driving in the kingdom exciting and adventurous.

The first rule is the “double-u-turn”.  If making a U-turn and the queue in the left lane is more than one or two cars the best option is to double-up the U-turn queue thus blocking the view of the first u-turner trying to look at traffic to his right and blocking two lanes in the original direction of traffic.  Perhaps a graphic would be more illuminating.

To properly complete this move it is best to not yield to oncoming traffic.  The oncoming drivers should know what you’re doing as they’ve seen the first u-turner waiting patiently to turn thus providing ample warning.

The second rule is the “left-handed-three-lane-turn”.  This simple move involves crossing two lanes of traffic to the left to make a 90-degree or 180-degree turn.  It is best to do this in heavy traffic when it appears many people will be turning left or you remember you needed to turn left while in the intersection.  The drivers in the other two lanes are often happily surprised by this exciting event and will relish the opportunity to test their brakes, effectiveness of their heart mediation, reflex times, and attentiveness of the driver behind them.  If all goes well, you should reach your destination 2-3 minutes faster.  If it goes bad, many vehicles will impact your car causing either (1) a multiple roll event or (2) driver side door failure.  Both options are fatal 99% of the time.

The third rule is the “snake”.  The snake involves never fully dedicating your vehicle to a lane of traffic.  It is best to modulate the vehicle’s left to right movements rapidly never holding a static forward motion. Blinkers should never be used and preferably permanently disabled (converting them to white strobe lights is a more appropriate use of the light housing and wiring).

Now that I’ve covered the fundamental driving rules, here are a few parting shots from the road: 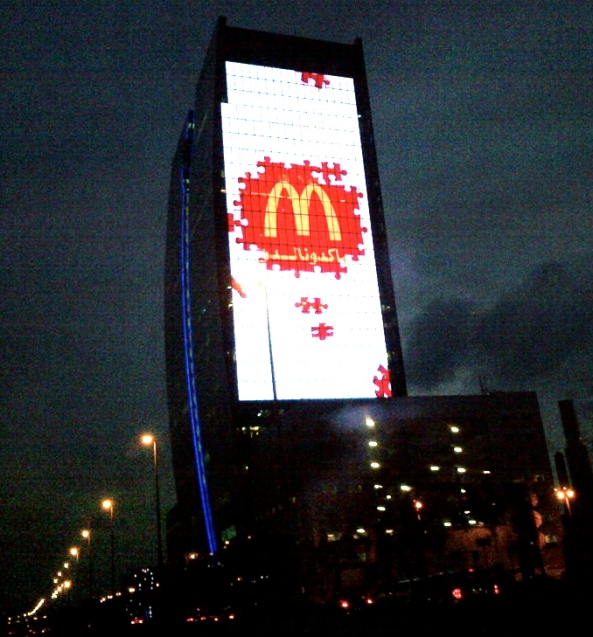 This is an impressive billboard the size of a building.  It is also quite distracting! 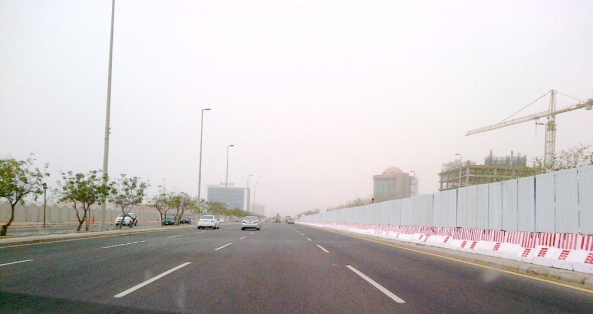 Cruisin’ in the Crown Vic!

Rashid was kind enough to treat me to some local Saudi food recently. Since Jeddah has been a crossroads for thousands of years most of the food here is a hodge podge mix from other nearby countries.  For breakfast we had “ful en tameez”.  This is the phonetic spelling as he didn’t know how to spell it in English and Google didn’t know either.

This common breakfast consists of Egyptian fava beans mashed up in a consistency similar to refried beans.  Accompanying the beans is bread called tamees, from Afghanistan.  It’s similar to pita bread and about the size of medium sized pizza.  A spicy mix of chilies, cilantro, tomatoes, and other goodies very similar to pico de gallo accompanies the beans and bread.

The first step is to add oil, salt, and spices to the beans.  Then add the pico de gallo mix to the beans and scoop it up with the bread.  This food is very popular with the labor forces as it tends to stick to your ribs all day.

For lunch I had Chicken Mhandi which consists of a full chicken, rice, and a couple of chili peppers.  Also a hearty serving, this meal had a unique flavor somewhat similar to Indian Curry. 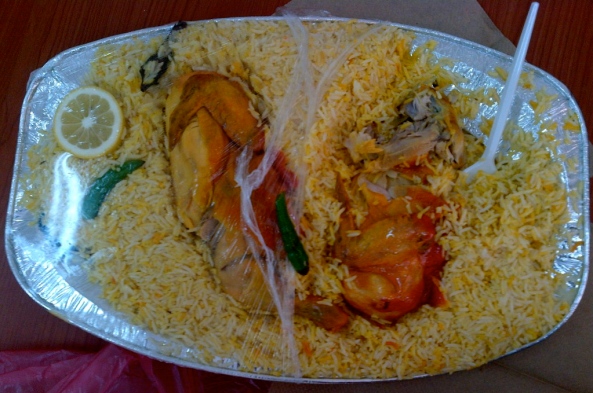 This lunch will put hair on your chest!

Traveling 34 hours with two kids under two across nine time zones in three planes will test mental and physical toughness in unique ways.  Here is a little quiz to see if you have what it takes.

Q:   You’ve arrived at the first check in counter and suddenly realized you’ve left your 2-year-old’s only milk bottle in the car.  Choose the best response:

a) Run with arms flailing and the whites of your eyes clearly visible until you chase down the car and bottle is retrieved.
b) Act like you didn’t notice and say the kid must have hurled the milk from the stroller without anyone noticing if questioned.
c) Tell your kid to suck it up. Milk is for homebody-travel-rookie-sissies.
d) Act cool until getting through security and then say it must have been confiscated.

Q:  Your car seat travel dolly shears in two in the middle of a train door with your child strapped to it. The best response is:

a) Curse in a foreign language so people won’t think you’re a stupid American.
b) Play it cool and do nothing until everyone exits the car hoping nobody notices.
c) Accuse your child of secretly grinding loose the welds on the frame when you weren’t looking.
d) Drag the car seat out of the door and look at your wife with the “what in the H are we doing here look and who’s idea was this anyway” look.

Q:  The ideal response to the man on the plane in front of you yelling at you because your two-year-old is kicking his seat is?

a)    Nothing, pretend he doesn’t exist and go to your happy place.
b)   Curse in a foreign language so people won’t think you’re a stupid American.
c)     Offer him a shot of whiskey.  You’ve had five and feel great!
d)    Ask him if he has a spatula or a George Foreman grill to change the subject.

Q:  What do you do when the lady behind you on the plane yells at you for reclining your seat because she has a baby in her lap?

a)    Show her the baby strapped to your chest and the seat fully reclined in front of you.
b)   Poke her baby until he starts crying.
c)    Give her the spatula and George Foreman grill the guy in the plane before gave you.
d)    Lift up your seat and hope the one in front of you doesn’t crush your child’s head (or spill your whiskey).

Q:  How do you offload two car seats, two sleeping children, five carry-on bags, and two slightly crazed adults out of a plane, down 20’ of steps in freezing Frankfurt temperatures, and in to a packed bus on the tarmac?

a)    Don’t move until everyone exits the plane hoping all the flight attendants, who can’t leave until you do, do it for you.
b)   Hurl each bag in shot putter form from the top of the stair landing. (the guttural yell is critical to this move)
c)     Be the first to get up and block the aisle with all you stuff until other passengers start helping.
d)    Open the emergency exit, inflate the escape ramp, and slide everything down (make sure and put on your life jacket fully inflated to avoid questioning).

In all seriousness, though, these events did happen to us.  And I learned that no matter how much I prepare for a trip, there is no way to really prepare for everything, especially with kids.  That is what makes traveling with them so much fun!  Whenever I see other adults lugging screaming children through airports I will always remember this trip, and we will probably have several more like it to come. Thus I have a newfound respect for those parents and the level of mental and physical toughness it takes to take on kid-air-travel. 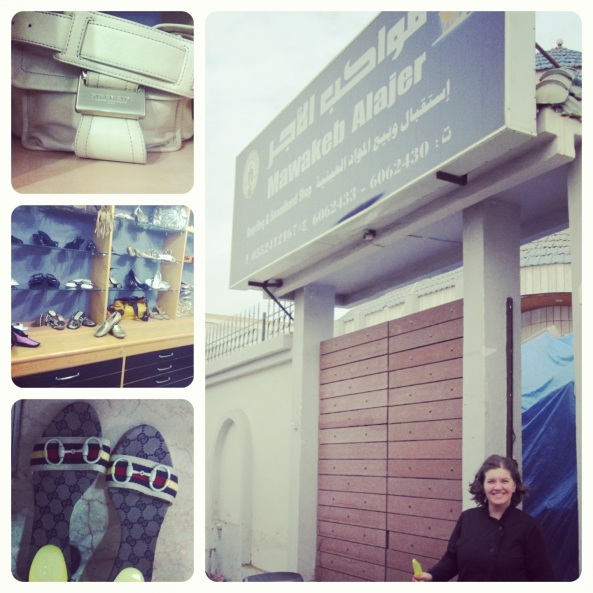 It is full of water at the end of each day. Yes, it’s that humid! Lets just add this to the list of items I wish we had in the Peace Corps!