Now it is time for the ubiquitous Westerner’s observation of Saudi traffic.  This is a must for any Saudi blog worth it’s salt.

The oddest thing about traffic here is how similar the quality of the roads and vehicles are to the US.  The vehicle comparisons are more like the SUV dominated lanes of North Dallas instead of Prius happy Northern Virginia.  I’m pretty sure religious police here have some sort of ban on Priuses due to their suspicious lack of petrol consumption.

The wide roads with striped lanes, traffic lights, and curbs are similar to any US road in good condition.  The lack of a freeze thaw cycle and rain makes potholes pretty much non-existent.  Additionally, without a storm drainage system all the roads are nice and flat.  Of course this makes them lovely lakes if it ever rains, but that is minor detail.

The departure quickly comes in the design of the traffic islands, lack of signage, and odd rules of the road (described here with latent sarcasm).

The traffic medians are full of beautiful trees and nicely landscaped vegetation.  This is quite pleasing to the eye but eliminates an essential element to basic traffic flow.  The ability for one to turn or get out of the way of oncoming traffic whilst stopped waiting to turn.  Of course, this makes getting anywhere unbelievably frustrating.  Often we have to travel miles before being able to make a U-turn to get to the other side of the street.  This creates random bottlenecks in odd places throughout the city rather than distributing the traffic evenly over several route options.  This also makes Google Maps useless as it totally ignores road islands and assumes turning left or right is a valid option at any intersection.  I have to look at the satellite view and try and figure out the few locations available for multiple turn options when planning my route.  Here is an example:

Throw common sense out the window when navigating Jeddah roads!

Another frustrating feature is the lack of street signs and house numbers.  The street signs that do exist are mostly multi-part names.  Sometimes the names change.  For example Palestine Street is also referred to as Falstin Street.  Even if a street is fortunate enough to be named, most drivers don’t refer to the name unless it is a major thoroughfare.

The lack of house numbers makes the street nomenclature even more frustrating as there is no way to know where you are.  The result is directions by landmarks such after the Globe Roundabout, or two streets past the Danube Supermarket.

And finally, the best part about driving here are the rules of the road.  The following is a very serious how-to guide for following a few key rules that make driving in the kingdom exciting and adventurous.

The first rule is the “double-u-turn”.  If making a U-turn and the queue in the left lane is more than one or two cars the best option is to double-up the U-turn queue thus blocking the view of the first u-turner trying to look at traffic to his right and blocking two lanes in the original direction of traffic.  Perhaps a graphic would be more illuminating.

To properly complete this move it is best to not yield to oncoming traffic.  The oncoming drivers should know what you’re doing as they’ve seen the first u-turner waiting patiently to turn thus providing ample warning.

The second rule is the “left-handed-three-lane-turn”.  This simple move involves crossing two lanes of traffic to the left to make a 90-degree or 180-degree turn.  It is best to do this in heavy traffic when it appears many people will be turning left or you remember you needed to turn left while in the intersection.  The drivers in the other two lanes are often happily surprised by this exciting event and will relish the opportunity to test their brakes, effectiveness of their heart mediation, reflex times, and attentiveness of the driver behind them.  If all goes well, you should reach your destination 2-3 minutes faster.  If it goes bad, many vehicles will impact your car causing either (1) a multiple roll event or (2) driver side door failure.  Both options are fatal 99% of the time.

The third rule is the “snake”.  The snake involves never fully dedicating your vehicle to a lane of traffic.  It is best to modulate the vehicle’s left to right movements rapidly never holding a static forward motion. Blinkers should never be used and preferably permanently disabled (converting them to white strobe lights is a more appropriate use of the light housing and wiring).

Now that I’ve covered the fundamental driving rules, here are a few parting shots from the road:

This is an impressive billboard the size of a building.  It is also quite distracting! 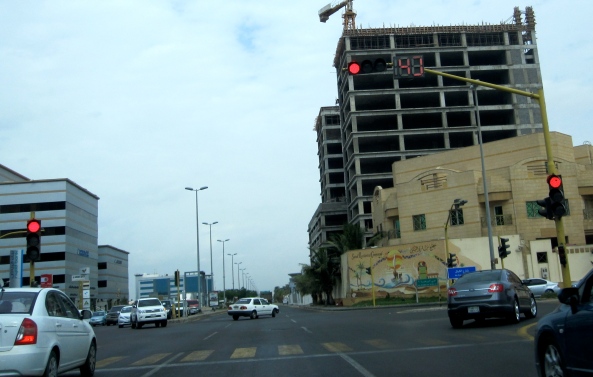 Cruisin’ in the Crown Vic!